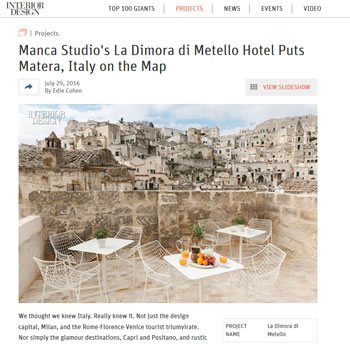 Meanwhile, light fixtures in the guest rooms are by Jasper Morrison or the team of Achille Castiglioni and Pio Manzù. Other notable production pieces include Christophe Pillet’s ethereal white tables and chairs, which almost float in contrast with the heavy stone of the terrace where they sit. Speaking of the terrace, it’s an all-day affair, perfect, Marina Manca says, "for breakfast, to relax in the sun sipping an aperitif, or to admire the night sky."
To that we add: cin cin.
© Tutti i diritti riservati